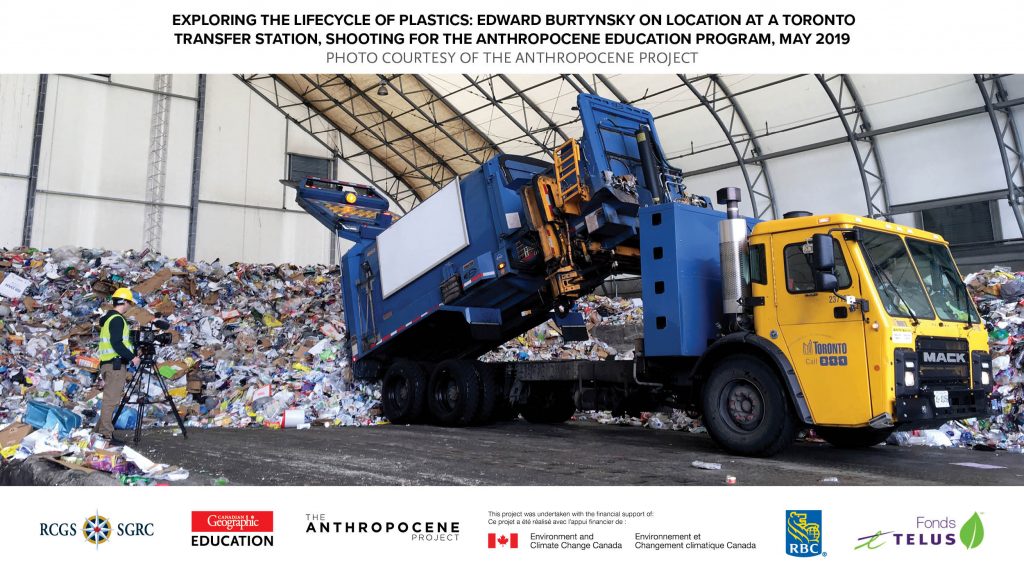 TORONTO and OTTAWA — This fall, The Royal Canadian Geographical Society (RCGS) will bring a unique bilingual education program to teachers across Canada in partnership with The Anthropocene Project from award-winning artists Nicholas de Pencier, Edward Burtynsky and Jennifer Baichwal. The education program, to be released in conjunction with Geography Awareness Week in November 2019, will be focused on exploring the extent of human dependency on plastics within Canada.

The Anthropocene Project was met with great success with the launch of two complementary museum exhibitions at the Art Gallery of Ontario in Toronto and National Gallery of Canada in Ottawa, and a full-length documentary film in September 2018. The new Anthropocene Education Program (AEP) will include incredible 360 VR films; educational short films by Baichwal and de Pencier depicting large scale anthropogenic activity; online, interactive gigapixel photographs; a brand new AR experience; and a large-scale high-resolution Giant Floor Mural depicting one of Burtynsky’s photographs with related film extensions (part of a travelling school kit), all of which will augment specific teacher guides and lesson plans. All educational materials part of the AEP will be written by qualified Can Geo Education teachers and linked to the Canadian National Learning Framework for K-12 Geography.

Additionally, the AEP will consist of travelling educational kits that will be made available free-of-charge to Canadian schools for a three week loan period. For schools without immediate access to these kits across the country, online resources will be available for free, accessible through download and streaming from the Canadian Geographic Education and The Anthropocene Project websites.

The program will leverage these stunning audiovisual resources, and the proven expertise and distribution networks of The Royal Canadian Geographical Society to expand The Anthropocene Project’s reach. In turn, this will create a powerful and change-provoking experiential understanding of human impact on the planet for students in classrooms from coast to coast, in grades 4 to 12 (ages 9 to 18). The project will reach more than 22,000 classroom teachers from across the country through the RCGS’s educational arm, Canadian Geographic (Can Geo) Education.

“The Anthropocene Project is an exciting opportunity for the Society to collaborate with some of Canada’s leading artists to influence how the next generation of Canadians thinks about their relationship with the environment, especially when it comes to an understanding of human impact on the planet,” says John Geiger, CEO of The Royal Canadian Geographical Society. “Stunning AV resources along with immersive learning tools will help students deepen their understanding of how today’s lifestyle of convenience may be having an irreparable impact on our planet.”

“After witnessing the strong engagement by students with the documentary film and the museum exhibitions, we are very excited that the five years of research and production that formed The Anthropocene Project will now be available to students and teachers alike as part of school curricula. We are honoured to extend the collaboration that started with the scientists of the Anthropocene Working Group to the incredible educational experts at the RCGS and to educators across the country,” Nicholas de Pencier, Edward Burtynsky and Jennifer Baichwal.

Beyond the subject of plastics, the AEP will also look to expand the teacher discussion guides to other key tenets of the Anthropocene investigation (deforestation, anthroturbation, extinction, etc), and will include a national school contest that challenges students to creatively interpret the themes of the Anthropocene in their own communities.

“Last month, the UN released a report that showed nearly a million species are at risk of extinction due to human impact on the planet. Over the last three and a half years, Canada has taken action to double the amount of our protected nature, beat plastic pollution, and fight climate change. I’m so glad that this project is educating and engaging more young people in such an important conversation that Canada is having right now. It’s young peoples’ future that is at stake—we must all recognize that we don’t pass the earth on to the next generation when we’re done with it, instead we are borrowing it from them.” Catherine McKenna, Minister of Environment and Climate Change.

The AEP will offer a window into the scale of human impact as it explores plastic proliferation around the world, with an aim to provide students with an experiential science-based education about the cycles of extraction, consumption and waste that humans participate in.

The Anthropocene Education Program was undertaken with the financial support of the Government of Canada through the federal Department of Environment and Climate Change and RBC Foundation and produced with the participation of TELUS Fund.

ABOUT THE ROYAL CANADIAN GEOGRAPHICAL SOCIETY

ABOUT THE ANTHROPOCENE PROJECT

TELUS Fund finances exceptional content that promotes the health and well-being of Canadians. The Fund is made possible thanks to the vision of TELUS Corporation and the incredible success of TELUS TV with more than 1.1 Million customers in British Columbia, Alberta and Quebec. The Fund is an independently governed, not-for-profit corporation certified by the Canadian Radio-television and Telecommunications Commission as a Canadian Independent Production Fund eligible to administer TELUS Corporation’s financial contributions in support of Canadian programming. Since launching in 2013, The Fund has committed over 25M to more than 100 projects.